×
Go to content
Michael Whiteley
Head Instructor
Michael began his Martial Arts training in Isshinryu Karate at the Chester Karate Academy over 35 years ago. Two years after starting he became an assistant to the Head Instructor and, after receiving his Black Belt, he was named a Full Instructor. Three years later he was appointed Head Instructor of the Califon Karate Academy. In 1998 Mr. Whiteley and his family started the Chatham Karate Academy and in 2005 they opened the Mendham Karate Academy. In 2014 the Chatham dojo was relocated to Madison and a year later the Mendham dojo relocated to Berardsville. Mr. Whiteley is a student of Sensei A. J. Advincula, from whom he received his teaching certification in June, 2010. In addition to Isshinryu he studies ACE Escrima, Hindiandi Gungfu and Kobudo from Advincula Sensei as well as Ryukyu Kobudo from Akamine Sensei. 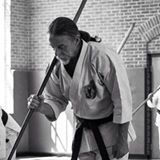